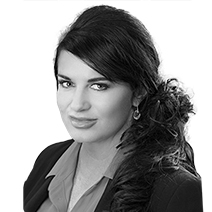 Kateřina Janstová has been a partner and attorney-at-law at Law Office Janstová & Smetana since 2007. She was registered under number 09829 in the List of Attorneys-at-Law maintained by the Czech Bar Chamber on 01 April 2003. During 1995 to 1997, she worked as a lawyer and later as an advisor to the Vice-Chairman of Executive Committee of the National Property Fund of the Czech Republic in Prague. She then worked for two years in the position of the head of the Legal Department of ALL IN, a.s. in Prague, before accepting the position of the head of the Legal Department of CRF Praha a.s. In 2000 and 2001, she worked as an in-house lawyer of General Transport Holdings a.s. In 2001 to 2003, she held the position of an articling attorney-at-law at Law Office Jansta, Kostka a spol. She was a partner in the Prague Law Office during 2003 to 2007.

In her practice as an attorney-at-law, Kateřina Janstová’s long-term interest has been directed at civil law and contractual relations, family law, legal relations to real estate, law of business companies and cooperatives and labour law.

Kateřina Janstová is fluent in Czech and English.

ANY QUESTIONS? WRITE TO US